Captain John Smith's thoughts expressed in his writings are the best way to know his character. 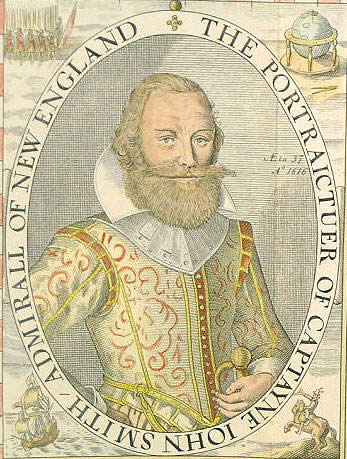 "History is the memory of time, the life of the dead and the happiness of the living." Smith

Smith on the American Settlements

"I call them my children," he says of the American settlements, "for they have been my wife, my hawks, my hounds, my cards, my dice and in totall, my best content, as indifferent to my heart as my left hand to my right." from 1922 New England Trials

To Be A Virtuous Man

"honour is our lives ambition"

"Then seeing that we are not borne for our selves, but each to helpe other, and our abilities are much alike at the houre of our birth, and the minute of our death: Seeing our good deeds, or our badde, by faith in Christs merits, is all we have to carrie our soules to heaven, or hell: Seeing honour is our lives ambition; and our ambition after death, to have have an honorable memorie of our life: and seeing noe meanes wee would bee abated of the dignities and glories of our Predecessors; let us imitate their virtues to be worthily their successors".from the conclusion of Smith's A description of New England (1615;1:361)

And here in Florida, Virginia, New-England, and Cannada, is more land than all the people in Christendome can manure, and yet more to spare than all the natives of those Countries can use and cultivate. The natives are only too happy to share: If this be not a reason sufficient to such tender consciences; for a copper kettle and a few toyes, as beads and hatchets, they will sell you a whole Country . . . the Massachusets have resigned theirs freely. Advertisements

On Slavery In America

these thoughts are before slavery was introduced in America by English

"Let all me have as much freedom in reason as may be, and true dealing, for it is the greatest comfort you can give them, where the very name of servitude will breed much ill blood, and become odious to God and man". Advertisements

delivered by Captain John Smith to his men when 12 days into exploring the Chesapeake bay in an open boat, when their bread was spoiled, the men tired and wished to turn back.

"Gentlemen", " what shame would it be for you to force me to returne with a months provision, scarce able to say where we have been, nor yet heard of that wee were sent to seeke. You cannot say but I have shared wit you of the worst that is past; and for what is to come, of lodging, diet, or whatsoever, I am contented you allot the worst part to myself. As for your fears that I will lose myself in these unknowne large waters, or be swallowed up in some stormie gust: abandon those childish fears, for worse then is past cannot happen, and there is as much danger to returne, as to proceed forward. Regaine therefore your old spirits : for return I will not (if God assist me) til I have seene the Massawomeekes, found Patowomeck, or the head of this great water you conceit to be endlesse." rememberence of speech written by Dr. Walter Russell and Anas Todkill

The Occupation Of Land In America

Smith says there is so much uninhabited land in Florida, Virginia, New England, and Cannada, their natives so few, and in England a great need.

"For God did make the world to be inhabited with mankind," further Smith says " And here in Florida, Virginia, New England, and Cannada, is more land than all the people in Christendome can manure (cultivate), and yet more to spare than all the natives of those countries can use and culturate (cultivate)." yet he says , "for a copper knife and a few toys, as beads and hatchets, they will sell you a whole Countrey (district); and for a small matter, their houses and the ground they dewell upon; but those of Massachusets have resigned theirs freely". Advertisements