Attempts on the life of Captain John Smith

and attacks to the colony 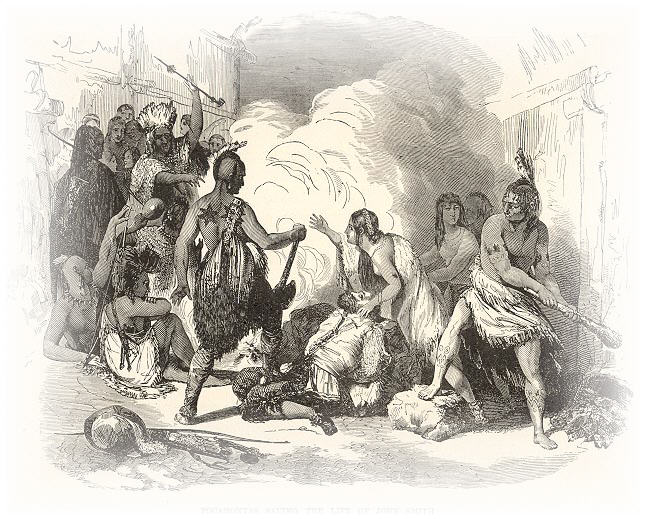 The Indians were peaceful in nature. Not!

It is amusing the many ploys Chief Powhatan tried to use to disarm and surprise the colonists in attempt to destroy them.

Smith prevented the ambushes and showed forbearancve in retaliation, more than anyone I can recall in all of history. Here is what Smith said about the ambushes.

"We maie thought verie patient to endure all thise injuries. Yet onlie with fearing them, we got what they had: whereas if we had taken revenge, thn by their losss, we whou,d have lost our selves." Smith

attacks by Indians of the Powhatan kingdom

April 26th, 1607. The first recorded attack by the natives was the evening upon first making a landing at Cape Henry (the attack is generaly attributed to the Powhatan tribe Chesapeaks who had inhabited that land.). An exploring party (probably without Smith) was returning to their boat after sunset when atacked by savages who crept up and attacked right in their faces. Two were wounded. [p123 TWCJS].

Two weeks after the arrival at the site to be JamesTown there is an attack.

May 26th, 1607. 200-400 warriors (probably the Paspahas, the closest tribe to Jamestown) attacked the unarmed tent fort of Jamestown and were scared off by cannon shot from the Susan Constant. Two were killed and a dozen wounded. It was then decided to unpack the matchlock guns from the "fat".

December 10th, 1607- Captured by Powhatan's brother Opechcanoe and 200 warriors 40 miles up-river on the Chickahominy when exploring and looking for new trading partners. Two men with him lost their life. One he left in the larger boat defied orders and went ashore and wa skinned alive and roasted.

December (last week) 1607 was taken to Powhatan's village Werawocomo and came a moment from having his head bashed in by clubs. He was saved by Pocahontas.

Early 1608. Captain John Smith leads a trading part on a food gathering expedition to visit Powhatan and his brother Opechancanough.

When visiting with Powhatan the following discourse too place:

Powhatan said ,"Let this therefore assure you of our loves, and everie yeare our friendly trade sghall furnish you with corne; and now alss if you would come in friendly amnner to see us , and not thus with your gunnes and swords, as to invade your foes."written by R. Wiffen and W. Phettiplace

To this Smith replied "we strive to make you knowe out thoughts by our deeds", As for your promise I find it every day violated by some of your subjects", " for your sake only we have curbed our desire for revenge", "that had we intended you anie hurt, long this we coulde have effected it". Your people coming to James towne are entertained with their bows and arrows without exception." written by R. Wiffen and W. Phettiplace

Powhatan said ,"I never used any of my Werowances so kindlie as yourself", "if you intend to be as friendly as you say, send hense your arms that I may believe you ; for you see the love I bare you, doth casuse mee thus nakedlie [to] forget my self." written by R. Wiffen and W. Phettiplace

Powhatan, leaving 2 or 3 of his women talking to the Captain, slipped away . Soon his men seceretly surrounded the house to ambush Smith, Smith, discovering the ambush pushed his way through the the savages with his target and pistol in hand causing them to flee one way and another so that without hurt he made his way to his Corps de Guard. and Powhatan, to excuse is flight, sent Smith a great bracelet and chain of pearl and men to carry corn down to the boat.

After a failed ambush by Powhatan and the typical apology and gifts from Powhatan, Smith goes upriver to see Opechancanough.

While in the lodge with Opechancanough, warriors to the number of 600 or 700 surrounded Smith's 15 soldiers in the lodge.

Now this was a near panic situation for Smith's men seeing such numbers. The possibility of escape seemed dismal to his men. Smith rose to the threat and to calm his men said, " Worthy countrymen, were the mischiefes of my seeming friends no more then the danger of these enemies, I little cared, were they as many more". But this is my torment, if I escape them, our malicious council, (Ratcliff) with their open- mouthed minions (Gabrial Archer), will make mee such a peace-breaker (in their opinions) in England, as will break my neck. I wish those here, that make these seem Saints, and mee an opressor".

Smith extracts he and his men from this ambush by grabbing Opechancanough by the hair lock, holding a gun up to the chest of Opechancanough to force those Indians attemptng the ambush up to drop their weapons .

to difuse the situation Smith announces to the multitude of Iindians who are now disarmed and gaterd about," if as friends you wil come and trade, I once more promise not to trouble you , except you give me the first ocassion".

as Smith sleeps in a lodge, a group of 40 or 50 of their choice men with swords seconded by 200 or 300 others attempt to enter . Awakened by the noise and haste of their movement Smith grabbed his sword and target and with several soldiers also in the lodge charged repelling those entering back out the door. An apology for this intrusion (ambush) is delivered by a legenth speech by Opechancanough.

the next day another ambush is attempted by it is pereived and a warning alarm given in time to prevent it at alarm which the warriors sneaking up fled.

staying for the next five or six days thereafter, Opechancanough's guests (Smith and his men are poisoned). "It made them sick but expelled itselfe".

"We maie thought verie patient to endure all thise injuries. Yet onlie with fearing them, we got what they had: whereas if we had taken revenge, thn by their losss, we whou,d have lost our selves."

attack during Smith's mapping of the Chesapeake

A) 25th of July , the 2nd day into second voyage of exploration, "wee incountered 7 or 8 Canowes-full of Massawomecks. We seeing them prepare to assult us, we left our oares and made way with our saile to incounter them; yet we but five (with our Captain) [that] could stand; "the rest, were sick almost to death, we put under our tarpawling, and put their hats on sticks by the barge side to make us seem many." "They fled with all possible speed"

attacks by other Indians not in the Powhatan kingdom

During Smith's mapping or the Chesapeake. Attack or perceived attack by Messawomacks

Attacks on the colonists not involving Smith