Were the colonists really lost ?

The colonists that left the Island of Roanoke knew where they were.

The colonists had left and gone to Croatan. They left a message to that effect on a tree and post of the fort for others looking for them to find. The message was found by a relief expedition. But due to bad weather, the relief expedition did not make it to Croatan to locate the colonists.

There were six additional expeditions in all during the next 13 years sent to find the lost colonists. They never made to Croatan due to various decisions by the captains to abort their mission. Some captain's decided to go plunder Spanish shipping. Other failed attemps were navigation errors supposivly.

Some say they were abandoned on purpose. In that year1602 Raleigh sent out an expedition under Samuel Mace who did land near Coratoan, traded with the Indians but apparently lacking diligence in his pursuit of knowledge, brought back no new information.

Captain John Smith wrote that when he was captured, Powhatan's brother told him directly that there were still colonists alive and also told Smith where they were located. Smith made note of this on his early map (usually called the Zuinga map because it was stolen by Spanish spy Zuinga and sent to Spain where it was found in early 1900's but a researcher in the Spanish archives) 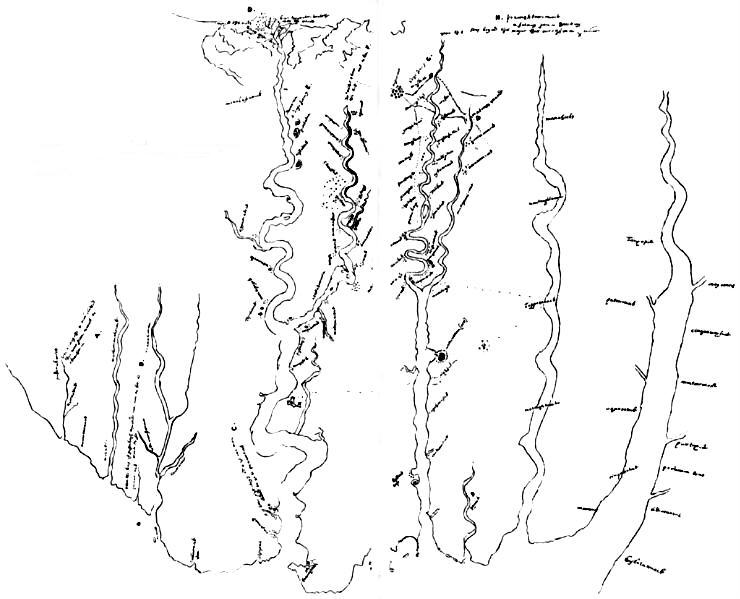 Captain John Smith indicates on his circa 1608 map, the location of the surviving colonists from Roanoke Island (notes A. & B. on the left side of the map) , the so called "Lost Colonists", as related to him by Powhatan's brother.

Smith's note A. says "here remayne the 4 men clotherd that came from roonock to okanahowan".

Smith's note B. says "here the king of the paspahegh reported our men to be and went to see".

Smith's note C. says "here paspahegh and 2 of our men landed to go to panawieck".

This map also shows by dotted lines the route and locations Captain John Smith was taken from the time of his capture, in White Oak Swamp near Richmond, until he was returned to Jamestown.

Captain John Smith noted that there were two attempts from Jamestown 18 years later (per the direction of the Jamestown's sponsor the Virginia Company) that left with guides but did not penetrate down to the area.

From the early 1600s to the middle 1700s European colonists reported encounters with gray-eyed American Indians or with English/Welsh speaking Indians who said they weredescent from the colonists. In 1669 a Welsh cleric named Morgan Jones was taken captive by the Tuscarora. He feared for his life, but a visiting Doeg Indian war captain spoke to him in Welsh and assured him that he would not be killed. The Doeg warrior ransomed Jones and his party and Jones remained with their tribe for months as a preacher. In 1701, surveyor John Lawson encountered members of the Hatteras tribe living on Roanoke Island who claimed some of their ancestors were white people. Lawson wrote that several of the Hatteras tribesmen had gray eyes

North Carolina's Historical Review of the Status of Croatan Indians

The Croatan Indians (designated "Cherokee Indians of Robeson County" by an act of the General Assembly of North Carolina ratified Mar. 11, 1913) comprise a body of mixed-blood people residing chiefly in Robeson County, N. C. A few of the same class of people reside in Bladen, Columbus, Cumberland, Scotland, and Hoke Counties, N. C., and in Sumter, Marlboro, and Dillon Counties, S. C. It is also said that a similar people, called "Redbones," reside in these counties in South Carolina, but I think it probable that they belong to the same class of people as those residing in Robeson County, N. C. In the Eleventh Census, of 1890, under the title "North Carolina Indians," they are described as "generally white, showing the Indian mostly in actions and habits."      They were enumerated by the regular census enumerator in part as whites; that they are clannish and hold with considerable pride to the tradition that they are the descendants of the Croatans of the Raleigh period of North Carolina and Virginia.

There is wide spread belief that colonists at Roanoke took refuge with the Croatan Indians during the first winter when Governor John White didn't return.

In 1719, a group of visitors found a tribe of Indians with light skin, gray/blue eyes and light brown hair that spoke Elizabethan English. These Indians told these visitors that their ancestors "talked from a book." Their customs were similar to the early English Roanoke Colony.

This visit brought about a theory that the starving colonists at Roanoke took refuge with the Croatan Indians during the first winter when Governor John White didn't return.

The Croatan, Cheraw, and other Carolina Indians were ancestors of the present-day Lumbees. Many Lumbee Indians to this day declare they are the descendants

There is a project underway to confirm that Lumbee are decendents of the Lost Colonists . Visit this projects web page to learn more.

In 1998, East Carolina University organized a archaeological investigation to see if any evidence fo the Roanoke colonists could be found on Croatan (Hatteras Island). Yes, they found it. . The excavation team sent to the island uncovered a 10 carat gold 16th century English signet ring, a musket flintlock, and two 16th century copper farthings at the site of the ancient Croatoan capital, 50 miles (80 km) from the old Roanoke colony. These items represent a definite connection between the Roanoke colonists and the Indians on Croatan (Hatteras Island).