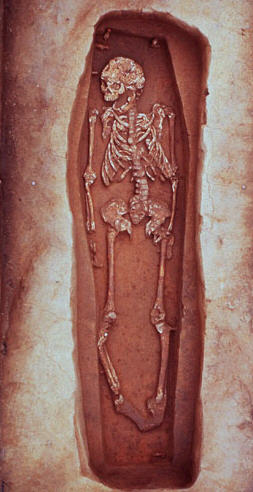 Photo on Virtual Jamestown website of a body discovered buried inside the fort http://www.virtualjamestown.org/images/artifacts/jamestown.html

On the website it is reported that "On September 5, 1996, JR102C (the scientific name) was found 100 yards from the southeast bulwark and within the walls of James Fort itself. The skeleton had a 20plus pieces of small shot lodged just below the right knee. From an examination of the skeleton and forensic reconstruction of the face, experts have determined that JR102C was a Caucasian male, 5'5" tall, about nineteen years of age, "moderately muscular but not used to performing hard labor, someone living the life of a gentleman." All of the speculation about JR's identity rest upon the assumption that he was an English gentleman. Much evidence points in that direction: he was buried in a coffin oriented east to west in accordance with Christian beliefs. Fragments of Indian artifacts are presumed to be related to previous Indian use of the site. Stephen Calthrop has been identified as the most likely candidate based upon accounts of internecine political wrangling that involved John Smith, Christopher Newport, and Edward Maria Wingfield. Calthrop is the only gentleman in Jamestown, for which we have age data, young enough in August 1607, the presumed time of the shooting, to fit the profile."

Could this body be Samuel Collier? It is most likly that it is.

Samuel Collier arrived with the first planters May 13, 1607 at whcih time he was listed as a boy

On December 30th, Captain John Smith left the king of Warraskoyak a boy, Samuel Collie,r as a "sign of his love". This was a usual practice to do so, to leave a boy supposedly as a sign of friendship. This was good for the English as the boy would soon learn the language and would be useful as an interpreter. Such a boy would also be an observer of native activity which may prove useful intellegence.The Discoveries and Accidents , LIB 3. [R Wyffin, J. Abbot, W. Phettiplace, A. Todkill]

His Death by Accident during the Summer or Fall of 1622

Quartering about Kecoughtan, after the Watch was set, Samuell Collyer one of the most ancientest Planters (means an early arrival, does not mean old age), and very well acquainted with their language and habitation (fits Samuel Collier), humors and conditions, and Governor of a Towne ( someone living the life of a gentleman), when the Watch as set, going the round, unfortunately by a Centinell that discharged his peece, was slaine. The Proceeding of the Plantations in Virginia, by John Smith 1624

It is likly that he was burried with honor inside the fort itself.

This is the recreated forensic reconstruction of the face of Jr 102C. This may be the face of Samuel Collier, "the Governor of a Towne", who fits the description in age, and lifestyle described by archeologists. From JamestownWebsite